Drinking craft beer is a unique experience in and of itself, and because it's got a life of its own, we need to understand the standard of the marketplace. Drinking large-scale commercially produced beer comes with certain expectations. Those expectations are not a measure of the quality of the macro-scale producer, or better or worse than the craft producer. Instead, they are simply different. When a consumer chooses a commercially produced beer they are choosing the scientific consistency in every bottle. Sure there are some characteristics of that consistency experienced by the senses, but none can be compared to the sensual stimulation of the Craft Beer Experience.

In the article "THE ART OF CRAFT BEER BREWING IN THE PHILIPPINES", we discussed how to design a beer, but that is only half the relationship that each brewer has with each of his/her customers. The other half of the relationship is the experience the customer has while drinking the beer. Each of the five senses is utilized to fully experience a craft beer because each of its characteristics is part of a whole, and the results are greater than the sum of its parts. And again, this is where the art of the beer-making process shines and can take the drinker on a journey through all the senses.

The first and most unnoticed sense is sound. The sound of the bottle or being popped tells the drinker the level of carbonation in the beer, and not all carbonation levels are the same depending on the style. Or when you open the tap and listen to the beer filling the glass; the sound may be subtle but it can prepare the drinker for certain flavor profiles and textures that they can expect when tasting the beer.

The next sense is sight and can pair with sound initially as you watch the beer being poured into the appropriate style glass meant for the appropriate beer style. You notice the color, the clarity, the thickness of the foam on top, which again, tells you a little more of the story behind the beer. The color identifies if the beer is true to style or possibly a variation on a particular style. Is it clear or hazy, which can be an indication of a flaw in the process or a more flavorful style of beer. 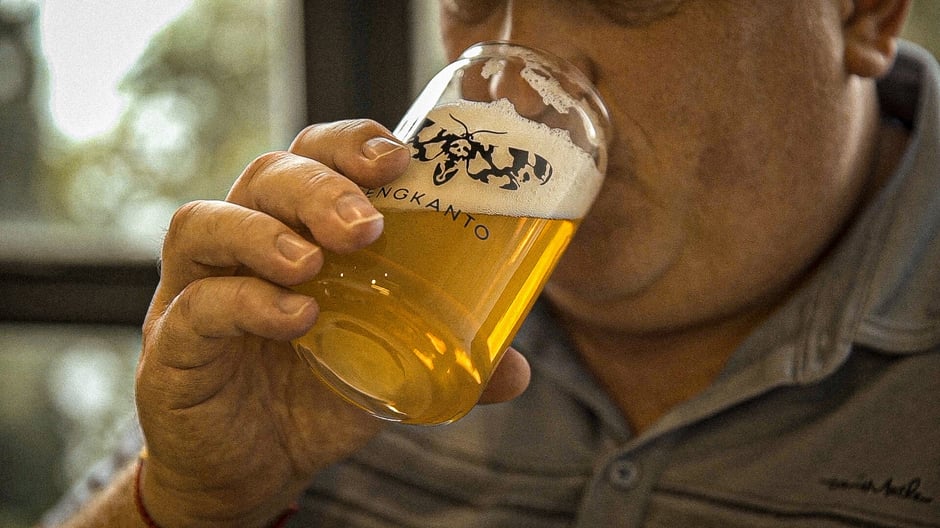 The smell can be the most exciting part of the process of experiencing a craft beer, especially with the modern practices of making beer. While there are some styles that can be identified by the aroma of the malts used, hops have become a more intriguing ingredient when using your sense of smell. The explosion of different hop varieties in the market, and the effect that dry hopping has on the aroma and flavor of a beer can take the consumer on a wild ride. The drinker can easily be asking themselves, “which fruit is this, or is it the rind, or maybe its a specific candy flavor?” Moving the beer around in the glass, or even warming the beer up slightly in your hands can also amplify this particular part of the experience.

Of course, the most expected sense to use when measuring the quality of a beer is taste. While your senses of sight and smell can dramatically change what you actually taste, we are going to focus on taste independently; that topic could be another article by itself. When tasting a beer you are looking for different elements from start to finish: Mouthfeel, initial flavor, lingering flavor, sweetness, saltiness, sourness, bitterness. Don’t forget that all taste buds are NOT made the same, nor are they always the same in one mouth. So, if you liked the beer the first time you had it and not the second, it may not be the beer.

Touch is a little more allusive a sense in the experience because it rounds out the remaining senses completing the holistic experience. Elements like the temperature of the beer or the glass, and whether the glass is appropriate for the beer style, will all play a factor in experiencing the beer. The level of carbonation can also be an element measured by your sense of touch, not taste. The level of carbonation varies with the style of beer and can have a very noticeable effect on how well the flavor characteristics tie together.

Anyone can drink a beer and if that is all you are after they have a commercially produced product that hits the spot every time. If it is an experience you are after you owe it to yourself and the brewer that crafted your beer to use all your senses and have some fun with the process.