Trying new things, taking chances, and keeping an open mind are fundamental to us at Engkanto Brewery.

The creativity we nurture reflects in our craft beers—internationally awarded by the World Beer Awards and Asia Beer Championship. In spite the accolades, Michael ‘MJ’ Jordan, Brewmaster for Engkanto, saw that shaking up the current beer portfolio was necessary. Why? It wasn’t connecting very well with the local drinkers. Not long after he made the big call, the entire team rallied behind him.

From choosing a new packaging with the easy-to-carry four-pack to putting together a fresher look and testing out new beer flavors, all hands were on deck. It’s time we reveal how Mango Nation Hazy IPA and Green Lava Double IPA came about from this spirit of collaboration and positive outlook. These two variants, together with Live It Up Lager and High Hive Honey Ale, complete Engkanto’s newest and freshest craft beer line-up.

Brilliantly clear and light bodied are common impressions many Filipino drinkers have when they imagine beer. Mango Nation Hazy IPA, from the name alone, tells you it's the total opposite. And that’s the exact intention. Before this new beer came about, Brewmaster MJ had the idea of introducing a hazy beer style. The word ‘hazy’ has become a shorthand for a class of craft beers called New England IPA that was first brewed in the US in 2004. It’s become widely popular in the American craft beer community that the term ‘haze craze’ was coined to describe the sweeping phenomenon.

Beer appreciation varies from one person to another, but serving out a hazy, juicy, out-of-the-ordinary craft beer to a clueless crowd can turn them off. What would it take to attract Filipino drinkers who are new to this style?

A sensational drink with prized mangoes

Early in the brainstorming stages for new beer flavors, mango was on top of the team’s mind. It’s a tropical fruit that we love, the local product is widely considered as world-class, and there are plenty of local farms that grow high-quality produce. Simply put, mango is a unanimous choice.

Brewmaster MJ’s vision for a hazy beer style was getting clearer: low bitterness, hoppy character, and an incredibly juicy sensation with pure mangoes. After several test brews that had the addition of oats, a new type of liquid yeast, and double dry hopping, the first batch of Mango Nation Hazy IPA was finally in bottles.

What local drinkers will experience from Mango Nation Hazy IPA is a tropical escape. At 5.7% ABV, this juicy, hazy, and fruit-forward beer has just the right level of sweetness from pure mangoes with tropical notes of coconut and pineapple from imported hops.

In keeping two of our award-winning beers in the portfolio, we are paying homage to the fans of Engkanto since day one. These two are Engkanto Lager, now the flagship Live It Up Lager, and the big and bold Engkanto Double IPA that has become the Green Lava Double IPA.

The explosive wave of hoppy flavor and aroma is what we’ve kept in the new DIPA. And its emphatic name, Green Lava, takes inspiration from the color of the hops and how we imagine they would naturally paint a beautiful hopyard. 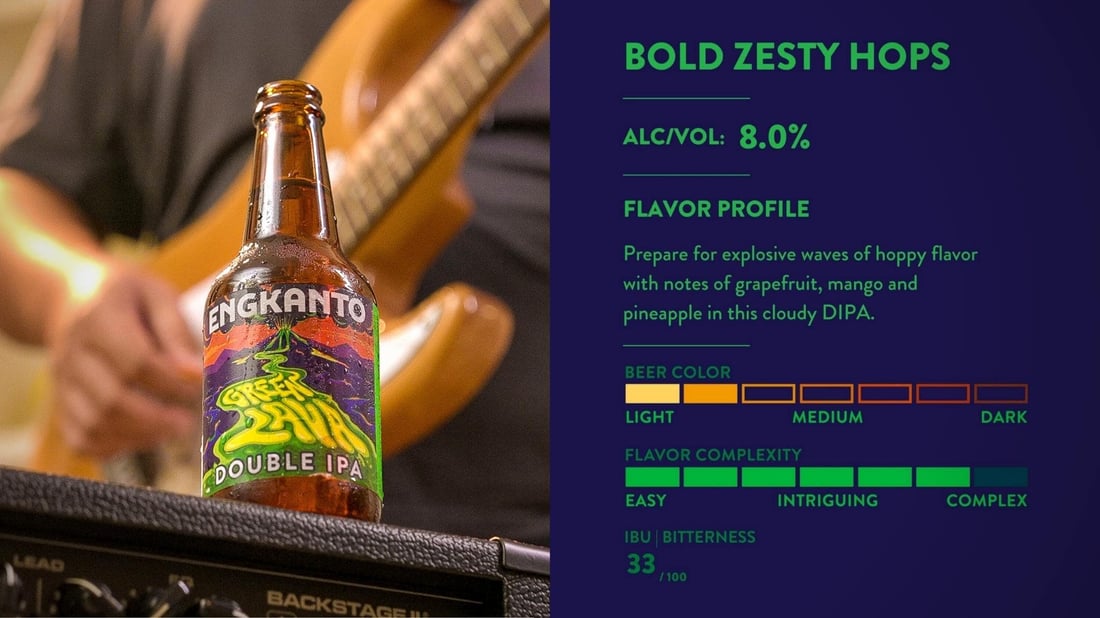 Striking ‘balance’ in the beer style

Green Lava Double IPA is big in alcohol content at 8.0% ABV, staying true to its style. Its bold and assertive character comes through with its bitterness, yet Brewmaster MJ put in his skills to make sure that the ‘balance’ or drinkable appeal of the beer is present.

After learning about the new beer line-up of Engkanto, experience the passion and creativity put into crafting these beers by ordering online or read more about the art of brewing in the Engkanto blog.